I follow a poetry/writing prompt group on Facebook, and every Wednesday they give new prompts to use until the following week. The latest prompts deal with novel forms of poetry:

Well, novel to me. I am not much of a poet, but I do write the occasional bit on Facebook. And I have read about a certain wordplay society known as The Oulipo thanks to Martin Gardner’s Penrose Tiles to Trapdoor Ciphers.

Writing a blitz poem bit mind-bending because it is a mix of word association and planning. You can read about the poem schematic here in the case you want to try your hand at this format.

However, they are giving away what they make.

Even worse is that, although the place is packed, no one is picking the drinks up.

Except me. After a suitable interval of five or so minutes.

So, all the time from noon to now, I’ve had:

No, I’m not vibrating, it’s the earthquake. There is an earthquake, right?

Today was apparently was when I felt seventeen, in which i felt invincible enough to combine bench and deadlift in my workout.

Well, I must confess, I really liked it. Really really liked it. Not enough to do it again within the month, but you get the point. All I know is that I will be needing a hot shower and maybe a painkiller in the night.

So yes,I have been getting stronger since I started the powerlifting program. Current stats:

These are five-rep max set, and I know I can go more, but just enjoying these numbers for the moment. And of course, I’m just coasting along various coffee highs as I do so.

Now to see if I can accomplish a squat/bench day.

I was all set for enjoying Spring when I realized, “Shit. When did I update the blog?”

Truth be told there is precious little to talk about. The days go by with the swiftness of time. Nothing but the soft hiss of sand through the hourglass.

The yarn is Lion Brand: Mandala. Colorway is ‘Pheonix’. Right now, I’m just knitting, hoping that something will work out in the end. Or not. Who knows.

It is better than the hourglass, eh?

So, last we met, we have started the Marley, and I might have used up all of the time between the last entry and this making it. Might. *cough* 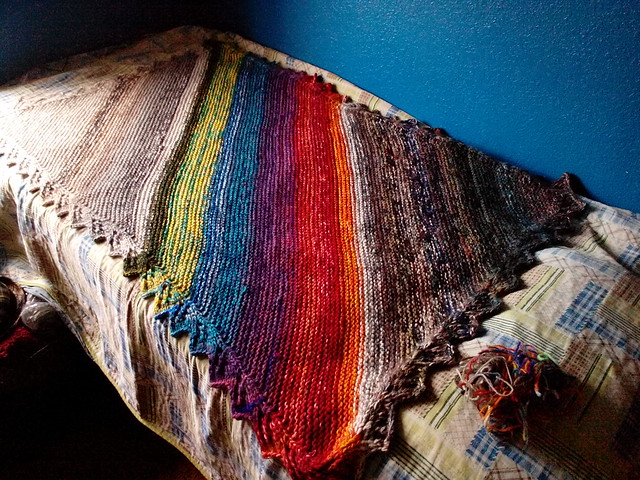 Name: Marley by Tin Can Knits
Needles: US11
Yarn: I cannot believe I had so much scrap wool yarn to make this. Er…various stuff, all wool. 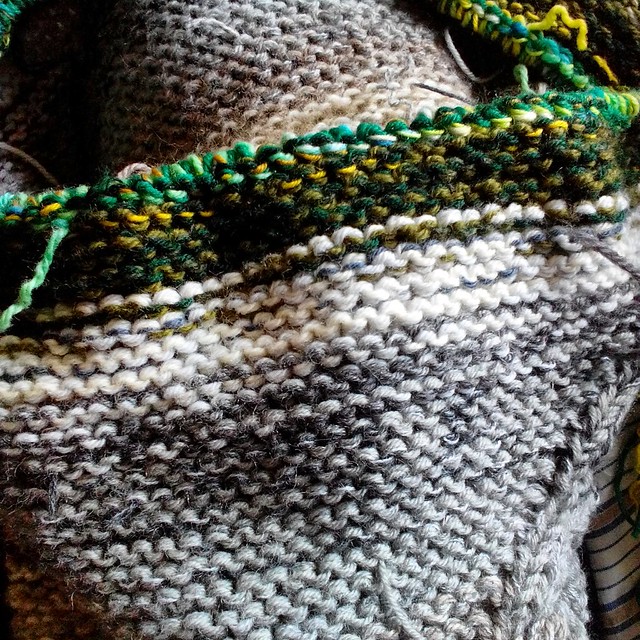 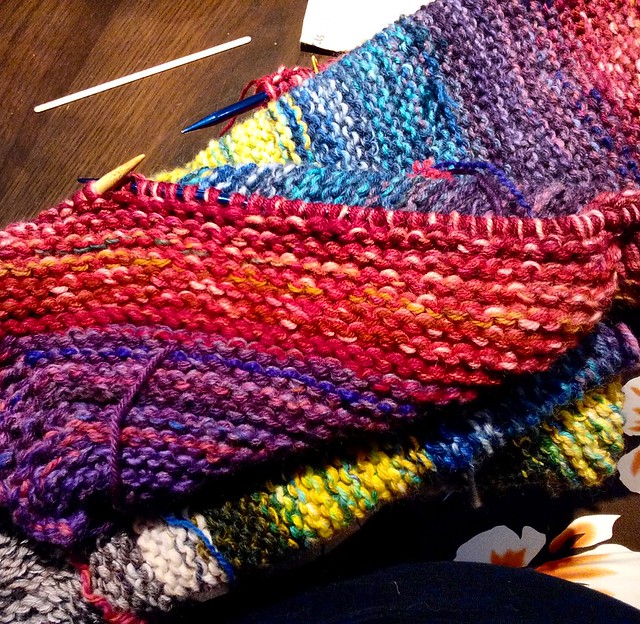 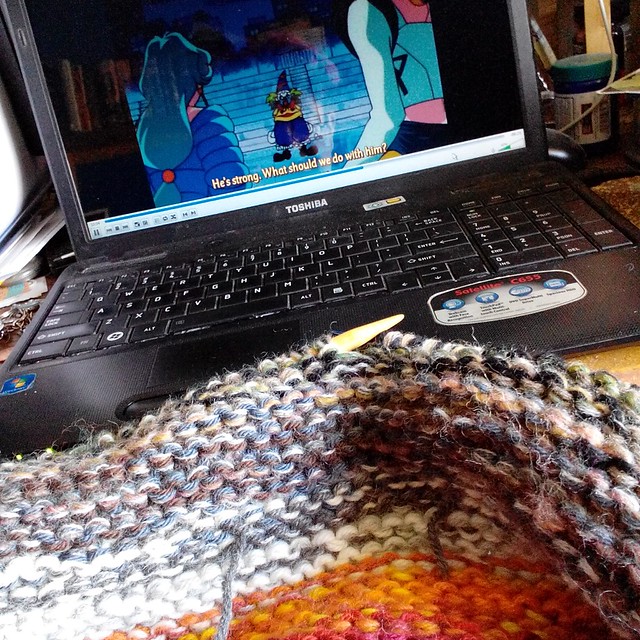 Watched a lot of Sailor Moon SuperS while knitting it. Also took it wherever I went, where I got lots of compliments on it. 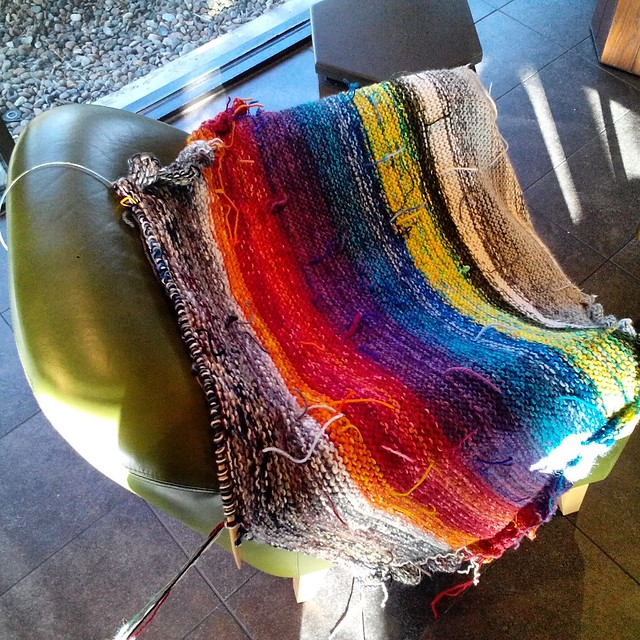 I casted off yesterday, and spent about ten minutes or so weaving in all of the ends that I couldn’t on route of knitting, then I tossed it into the washer.

Yes, you read that right, I tossed it into the washer. I filled the washer halfway and put in about a half-travel bottle of baby wash, then I gently placed the blanket into the bath. Closed the lid and let it agitate for ten seconds, then opened it for three or so minutes. Did that twice more before letting it soak for ten minutes, drained the water out. Repeated for the rinse, making sure the water did not hit the blanket while it was filling.

Sadly enough, I did not have enough foam square tiles for blocking, so I improvised: placing a few unused garbage bags on the floor, making an appropriate rectangle around them, and pinning the blanket’s lace border on the tiles, making sure not to stretch too badly. But it worked!

So yes, it turned into a really nice thing. Squishy and drapey. Oh, and it grew! It was 33x52in. before blocking and expanded to a generous 33x57in. Really nice and warm. Perfect for the summer nights when the AC dips to a frigid 75F. Yes I know it isn’t really. Hush.

I have no idea what is going on to this tablet. Everything is just so wonky with it, crashes all over, and its just crazy. I think I might have to do a reset to see how it goes. *sigh*

How’s you guys? I am cursing the fact that I had to trip ove a shoe last night and thus spraining my right thigh and knee. Nothing major but dammit, the mere presence of it has me skipping the gym. And I was so wanting to do today’s workout…

At least I’m enjoying the knitting.

Funny back story: Getting bored with crochet, i was looking through the wonderful blog of Tin Can Knits, and they were talking about blankets. Namely, the largest, bulkiest blanket I have seen so far. I mean, look at that post and tell me that is one of the coolest things you have seen. I’ll give you time to read through the post.

The blanket got me inspired. I looked through my stash and found lots of stash yarn that I know I am not going to use. Things like seven skeins of natural wool. Or thirteen balls of scrap. You get the idea.

So I cast on. And it is growing huge.

The pattern comes in four sizes, each one based on yarn weight. I chose the Bulky option, for which I am holding various worsted and lesser weights double (or triple). Right now it is giving me this squishy fabric that drapes rather nicely and will probably do more when blocked. Yes, I do understand the complcations that might occur when it is time for such a thing. We will do something unadvisable and ignore those complications until we are done. Or until the yarn runs out. Hm.

So, while I’m on Facebook, I occasionally see posts from a local poet by the name of Edward Vidaurre. He’s a very neat guy; I’ve seen him recite his works in person. Anyway, these posts are prompts. He gives five words and tells us to write a poem with them. I’ve been meaning to post them on the writing blog, but I think I can do better if I put them here.

In the darkest of yesteryears,
mermaids drifted through the seas
speaking in heavenly dialects,
luring sailors to their dooms.

The smell of watercress
renewed dissolving memories
of me and you, walking barefoot
through the thorny garden.
Tears falling, reliving such glad moments.

I strolled the urban cupolas
Enmeshed with the rails.
The threnodies of trains
Leaving me numb
As they passed
Above me, the sunlight strobing.

In which I take a leasurely stroll down the Island. Filmed yesterday.

No literally, what the heck. I blink and it’s mid-March. A few days until Spring Break. A few more days until the annual trip to the Island. The hell!

At least I’m not the only one here in this realitorical realm of the world with that mindset. I’m more focused on Instagram than on here that I am seeing Dust Kittens™ gathering all over the place. And don’t get me started on Twitter. Gosh.

At least I am here. I need to play catch up later on. If I don’t forget.

Ramblings, shamblings, and other grooves
Blog at WordPress.com.